I’ve been remiss in keeping up to date with news, but happily that’s because there’s been so much developing. Between travel, the day job which is always crazy during the first quarter of the year, and music projects, things at Nibbleheim haven’t been dull.

I was lucky enough to attend the Minnesota Orchestra’s Composer’s Institute in January, as an auditor. After the trauma of the election, which very much colored my holiday, this trip turned out to be just the tonic my psyche needed – no beach could have been better. What a gift to be able to sit in on this invaluable program and interact with this world-class ensemble who are so dedicated to and invested in fostering new music and developing composers, and with such depth: in addition to three days of seminars from industry leaders, the composers got a reading session, two full rehearsals, and a public concert that sold incredibly well and was nationally broadcast. It was so soul-restoring to be reminded that there are still large organizations and patrons dedicated  to fostering new music, including on scales such as this. Plus the treat of getting to know the wonderful folks at American Composers Forum, who co-host the Institute. I can’t encourage young composers enough to apply for this. Sure, it’s a bit of a long shot, but you’ll never know till you try and the experience alone, aside from the opportunity to work directly with this storied ensemble, is so worth it.

For me, the trip would have been worth it just for three straight days with Frank Oteri, arguably the greatest brain in the American new music scene, and himself a fantastic composer.

Then it was back to New York for my seventh year as co-producer and music supervisor for Broadway Belts for PFF!, the annual fundraiser I helped found in honor of my friend Michael Kuchwara to battle ideopathic pulmonary fibrosis. This event amazes me every year: despite months of ricocheting communications, uncertainty and a thinly stretched team, we never fail to turn out an extraordinary show featuring current and veteran Broadway talent. This year we lucked out on having as our headliner legendary Broadway and R&B star Stephanie Mills.  What a thrill to work with this luminous artist who gave me goose bumps as a child in the original production of The Wiz, and gave me even more during our show.

Then it was off to Edmonton, Canada for a little gig for their wonderful opera company, and to Los Angeles to supervise a conference for my day job (the header photo of this post was taken on the travel day between both locations). A late winter week in warm, mellow Venice Beach is not a bad thing: sometimes being a 5 to 9 or dayjobbing artist has its perks. 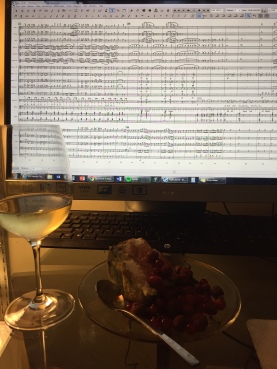 Speaking of Edmonton Opera: my biggest news (at least that’s confirmed and I can publicize) is that I’ve signed on to do vocal arrangements and orchestrations for a new “hybrid” version of Gilbert & Sullivan’s H.M.S. Pinafore for their upcoming season. This has been a fascinating and terrific experience, working with a superb creative team. Faced with a few limitations, we’ve wound up coming up with something unique and great fun, which only goes to show you what you can create out of limitations. You can read more about it here. It’s probably immodest to say that I think some of the ideas I’ve come up with so far are the bees’ knees… but I do.

And if you’ve been keeping up with my blog about my reduction of Strauss’ Elektra, you’ll have seen that note entry on this modest little pastime is finally done and the score is in the initial stages of proofreading. As a result, orchestras in both Australia and Germany have approached me about premiering it, probably early next year.  More on that when it’s nailed down.

Coming up: New Music Gathering in Bowling Green, OH in early May. I’m really looking forward to attending this for the first time and meeting artists I’ve gotten to know through @musochat, as well as others. If you’re also attending, please introduce yourself! Then it’s home to roll up my sleeves and hibernate on the Pinafore project for the summer, with a little attention to some of my own personal work in between.